There are quite a number of image editing packages on the market but our editor of choice has always been Adobe Photoshop. The comprehensive range of facilities allows us to manipulate images for websites, brochures and leaflets and create stunning graphics, examples of which you will see throughout this and every other website we create. The purpose of this page is to guide you through the process of turning a rather dull source image into a finished banner image.

Our source image was taken at The Callanish Stone Circle, on the Isle of Lewis in the Outer Hebrides. It was taken on a very dull day but even the original picture has a kind of mystical atmosphere about it. 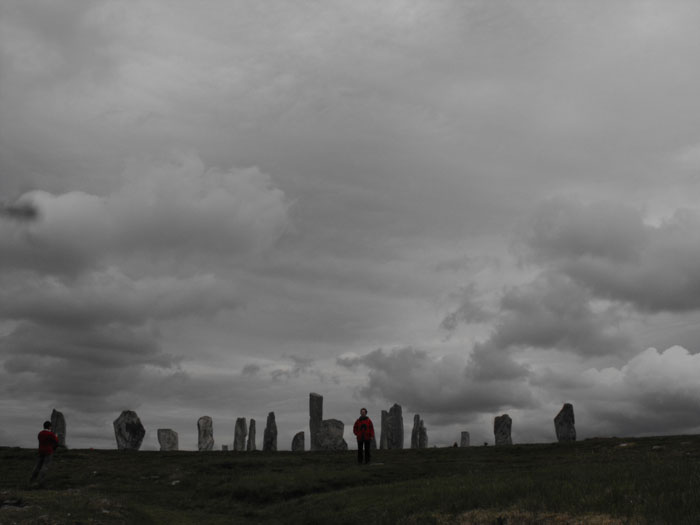 We only require a part of this image to create out banner so we crop out the unwanted sections. The subject in the centre is staying but we must crop out the unwanted parts of the picture as well as increase the brightness and contrast. Once the photographer on the left and the excess sky was removed the image was becoming more suitable for its intended purpose.

The Shape of Things to Come

The final image was to be used as a page banner so had to be letterbox shaped rather than have the proportions of a landscape picture.

We don't want the foreground to show so with a combination of erasing and covering with a layer copied from the sky, the ground starts to disappear.

Further blurring of the couds makes the mist effect look far more natural and the overall picture is starting to look the way we intended.

I always like pictures to have borders and in this case, the border consists of 2 parts. The inner black border makes the content stand out.

Then the addition of a multi coloured pastel border softens the edge of the picture and continues the dreamy feel out into the surrounding page.

Finally, we add some text to the picture and the editing process is complete.

We create all of our own graphics in order to offer clients unique and copyrighted content for their websites. Be very careful with copyright issues as infringements can cost you a great deal of money.

We pride ourselves in creating excellent graphics.

We have been known to go to extreme lengths in order to capture the image we require for our clients. The truck, in the image below, was photographed travelling down the M6 and then it was edited and used as a striking head image for the owlparts website

We went to even greater lengths to capture the image for the website of the Smithy Inn, we were forced to drink beer and eat excellent food in our bid to capture the essence of a fine country inn.

Within 3 months of taking the previous picture, we were faced with a major editorial decision. The brewery had repainted the outside of the Smithy Inn and modernised the signage as they realised this busy country pub was one of their greatest assets.

What were we to do?

The choice of leaving the old image on the Smithy Inn website or reflecting their shiny new signage was an easy one. It was a win-win situation all round as they got the nice new page banner, this thriving country pub deserved and we got a chance to visit Pam and Tom at one of our favourite country pubs again. The format of the new signage didn't lend itself to taking up the full width of the banner so we merged the new signage with some of the pub's interior shots we had taken previously. It is this attention to detail which sets us apart from other local graphic designers who believe the only way forward is to turn everything into a cartoon. There is nothing wrong with cartoons, unless they portray your business as being a bit of a 'Mickey Mouse' outfit.